Episode 81: Do Whales Have Germs? 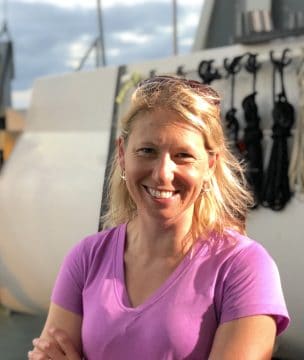 Dr. Amy Apprill is a marine microbial ecologist and Associate Scientist in the Marine Chemistry and Geochemistry department. Apprill’s research focuses on the ecology of microbial communities (or ‘microbiomes’) residing in association with sensitive animal hosts and ecosystems of the ocean. She studies the factors driving
microbial growth, interactions and succession within these environments and the microbes’ functions and contributions to the health of their host or ecosystem.
Examples of her research include using drones to examine the upper respiratory microbiome of large whales and founding a new U.S.-Cuban scientific collaboration
to study microbial biodiversity on the pristine coral reefs of Cuba. Apprill is an avid explorer of worldwide coral reefs, and has brought her research approach to the reefs of Florida, U.S. Virgin Islands, Curaçao, Cuba, Hawaii, American Samoa, eastern and western Australia, Federated States of Micronesia and the Maldives.

Apprill’s work has been featured in over 60 publications within scientific journals
and has attracted media attention. Apprill’s work on the Cuban coral reefs was
featured in a Project Earth documentary by Fusion television, and her work on
humpback whale-associated bacteria was highlighted in Science magazine’s ‘XX
Files: Extraordinary Science, Extraordinary Women’ video series. Apprill grew up in
Raytown, Missouri where she returned in 2017 to receive her hometown ‘Hall of
Fame’ award. Dr. Apprill received a B.A. from the University of San Diego and
M.S. and Ph.D. degrees from the University of Hawaii.

Make your own agar plates ( maybe something like this:  Petri Dish Kit )  Then find out if you have the same bacteria as your dog/cat? Or as your brother or sister?

Swab your mouth or your skin. Swab the animal. Swipe both swabs on their own petri dish. Then let the bacteria grow and COMPARE! Highlighted book for this Episode!

Science Comics: Whales: Diving into the Unknown by Casey Zakroff and Pat Lewis

Ocean Animals for Kids: A Junior Scientist’s Guide to Whales, Sharks, and Other Marine Life
by Bethanie Hestermann and Josh Hestermann

Secrets of the Whales by Brian Skerry and James Cameron