Episode #57 What Do You Need to Know to Operate a Rover on Mars? 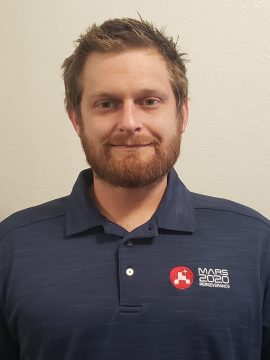 Brian’s fascination with space began in middle school and the Boy Scouts with the introduction of rockets. The journey in a career in space took its first big leap in the form of a BS in Aerospace Engineering from the University of Arizona and an MS in Astronautical Engineering from the University of Southern California. The next big step was joining JPL in January 2017; from Jan 2017 to Apr 2021 Brian was a member of the Mars 2020 Perseverance Rover mission. More specifically, he was a test and data analysis engineer for the Sample Caching Subsystem, specifically the Corer (a.k.a. The Drill!) In Sept. 2020 he join the Engineering Surface Operations for MSL Curiosity mission. He presently works as a downlink assessment and tool development engineer analyzing the data Curiosity sends back to Earth.

Take a look at Brian’s career at JPL below to see exactly what he did and how his job progressed. See, anyone can learn and grow at their jobs, just like he did. Talk about COOL engineering!!

Roles: Test Engineer and Data Analysis for Sample Caching Subsystem, specifically the Corer (a.k.a. The Drill!)–  Brian tested the drill’s capability in our thermal-vacuum chambers before Perserverance was launched to Mars. Then he was on the team that analyzed the data after each test is complete. The goal is to make sure the hardware is healthy and working properly.

Roles: Downlink Assessment and Tool Development for Curiosity Engineering Surface Operations– where Brian analyzes the data that Curiosity sends back to Earth. He had to make sure that the rover executed its activities and is still safe/healthy. His job was also to build tools to analyze data faster/easier on Earth when Curiosity sends it back.

Here is a video of some AMAZING things that Curiosity has discovered evidence of on Mars.

Learn about gravity on different planets. Use a pulley system to feel different weighs.

Try this experiment here on Inventors of Tomorrow.

With your parent’s permission, send us a picture or drawing of your pulley system.

Curiosity: The Story of a Mars Rover by Markus Motum

You Are the First Kid on Mars by Patrick O’Brien (Author, Illustrator)

The Mighty Mars Rovers: The Incredible Adventures of Spirit and Opportunity by Elizabeth Rusch